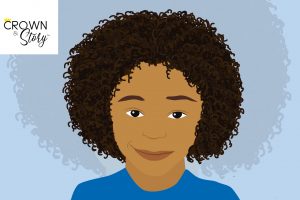 In the Black community in particular, our hair is a huge part of our identity – it is our crown – so the way we choose to wear it often comes with connotations, which can make us feel judged. For example, the Afro was deemed militant and the weave was (and still is) considered by some a signifier of self-hate!

Personally, I have tried it all; I’ve had relaxed hair, weave and extensions. I’ve even had blue highlights at school to match my blue braces – I know, what I was thinking!? Now, I wear my hair in locs and, for me, it’s been the best decision, not only for the health of my hair but also my self-confidence and current idea of beauty, but I was fully aware that I may be judged for it – we all know what that news anchor said about Zendaya!

Afro hair is indeed beautiful and magical but strangers should know by now, that touching it (and just people in general) without permission is a big no-no! There are many songs, books and hashtags that have warned the world about touching but in an image-conscious world, unfortunately some of us are still being silently (or not so silently) judged.

In this article, I will be exploring how and why this happens through an interview with Cristina – a mother of a young boy with long hair. In the Western world, it is deemed ‘normal’ and ‘acceptable’ for boys to have short hair, so I wanted to find out if there are any challenges he and his mum face for having a crown that’s outside the ‘norm’.

Cristina is a mother of two, journalist and documentary filmmaker, originally from Cape Verde Islands. Her hobbies include reading, watching documentaries, baking, and spending time doing fun activities with her children.

Her son, Joylen, is four years old and he enjoys playing football, dancing to African music, baking delicious cookies, watching cartoons, drawing and playing with his older sister in the garden. Joylen’s favourite superhero is Black Panther, and when he grows up, he wants to be a football player and a famous super hero to save the world!

Tell us about Joylen’s hair story. Has he always had long hair?

Joylen’s hair story started, when he was two years old. He had short hair at the time but after seeing his sister as a character in the book I‘ve Got My Hair, he was inspired and asked “Mummy, can boys have long hair too?”. From that moment, I promised him that I would not cut his hair and explained that Kings can have long hair.

How does he feel most confident wearing his hair and why?

Joylen loves his hair and he became more confident and happy when he realised that he can do a lot of different hairstyles; from ponytails to braids. When I am doing his sister’s hair, he always asks me to do his hair too. Sometimes I ask him if he wants to cut it and he always says no. He truly believes that his hair is beautiful and gives him super hero powers!

Have you or he ever felt judged (positively or negatively) by the way he wears his hair?

Yes, I receive both positive and negative comments. Unfortunately, there are a lot of negative stereotypes and assumptions made about boys who wear their hair long. When Joylen wears a ponytail some people would say “What a cute little girl?” or ask me why I don’t cut his hair. Others may say that he has a beautiful hair, so it depends.

Do you think black boys and girls are judged more based on their hair?

Definitely. Brown boys and girls are judged based on their hair because it is much more than a style; it’s political. There is more flexibility in accepting girls with long hair than boys, because in society’s eyes, the norm is that boys should have short hair.

What does Joylen say about his hair?

Joylen always says that he wants long hair because he wants to look like mummy and his sister. Furthermore, Joylen loves football and after watching some footballers with long hair, he is much more confident. Sometimes when I am combing his hair and it hurts, I ask him if I can cut it and he starts to cry, saying “No I don’t want to cut my hair!”

Would you cut his hair if he asked?

Do you let people you don’t know touch yours or your Joylen’s hair? Why/why not? Why do you think people want to touch afro hair so much?

No, I don’t let people touch mine or my son’s hair because some people look at our children as museum pieces. When they see a mixed-raced child, one of their focusses is the hair and making comparisons between the white and black side. I think people like to touch afro hair so much because they consider it exotic or a trend.

What do you think about the Western social standard of boys having short hair and girls having long hair?

Unfortunately, the Western social standards of beauty doesn’t reflect us (black people). I feel as thought they want to transform people into “ginger bread men”; copying and pasting standards but we should all have the chance to choose our hairstyles. Hair also represents culture, religion and power relations. For example, in certain groups wearing their hair bald is celebrated and in others having long hair is a sense of pride, like in the Rastafarian religion.

Do you see Joylen’s hair texture or length represented in the media?

The media tends to represent a stereotypical image that boys are less sensitive and their short hair is symbol of strength and masculinity. Joylen’s hair is fine and is closer European hair types, so I can see Joylen’s hair texture represented but the length is not.

What do you think of Leanne’s Crown & Story campaign?

I think that Leanne’s Crown & Story campaign is phenomenal because it raises awareness of an important conversation; the need for representation of different hair types and lengths. It is absolutely inspiring to watch the combination of digital art and hair politics and this art is a crucial tool to fight against discrimination.

If you are interesting in my Crown & Story campaign, please read other interview here. I sell a range of greeting cards and gifts featuring men, women and children with different hairstyle and textures, so let’s celebrate them all. Visit my online shop here.

This website uses cookies to improve your experience while you navigate through the website. Out of these cookies, the cookies that are categorized as necessary are stored on your browser as they are essential for the working of basic functionalities of the website. We also use third-party cookies that help us analyze and understand how you use this website. These cookies will be stored in your browser only with your consent. You also have the option to opt-out of these cookies. But opting out of some of these cookies may have an effect on your browsing experience.
Necessary Always Enabled
Necessary cookies are absolutely essential for the website to function properly. This category only includes cookies that ensures basic functionalities and security features of the website. These cookies do not store any personal information.
Non-necessary
Any cookies that may not be particularly necessary for the website to function and is used specifically to collect user personal data via analytics, ads, other embedded contents are termed as non-necessary cookies. It is mandatory to procure user consent prior to running these cookies on your website.
SAVE & ACCEPT